The article «In Spain, is the expenditure on R&D a determining factor in its external competitiveness? [1]» (published by Harvard Deusto Business Research) has as its fundamental objective the study of the growth in Spanish exports —a fruit of better competitiveness— despite the low investment in Research and Development (R&D) in Spain.

However, this work reflects that Spain is an exception. One can affirm that Spanish competitiveness doesn’t adjust to its investments in R&D. It’s demonstrated that in recent years, the most developed countries have achieved a high level of competition thanks to technological development due to a bigger and better investment in innovation. Despite of its low investment in R&D, the exports of Spanish companies have been increasing progressively from 2010 to 2016, which has increased its percentage of all global exports.

The causes of this imbalance between low investment in R&D and more competitiveness are, principally: the reduction of production cost, the fall of sales of Spanish companies in the national market and the development of factors such as infrastructure, health, education, and technological maturity that improve productivity and stimulate exports.

This study concludes with a series of propositions to maintain this pattern of economic growth in Spain, by way of its competitiveness, and highlights the necessity of policies, that have promoted an increase in its exports and to incentivize a larger investment in innovation, following the example of other developed countries. 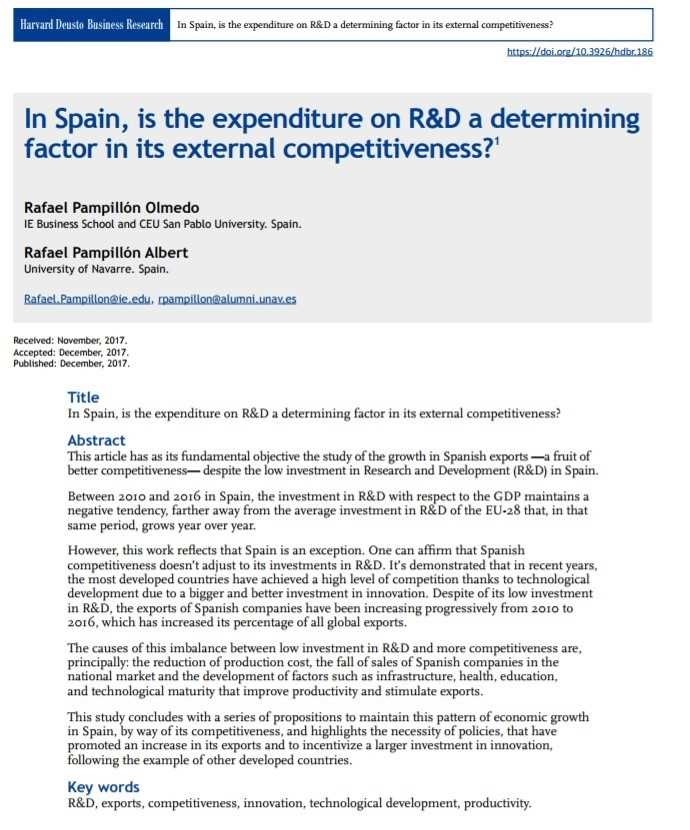