Prime minister Rajoy is asking Europe and the ECB to do more to help Spain, and the IMF´s austerity debate makes it appear that it agrees.  Undoubtedly they are right.  But the Spanish government has much more that it could do to help its economy recover without outside help.  It could break out of its paralysis on structural reform and make room for the country to grow. 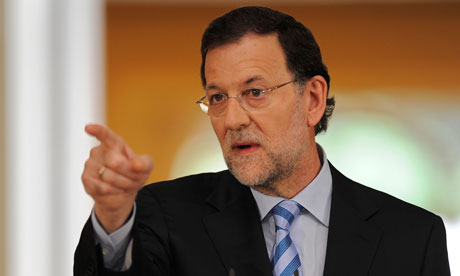 What does Spain need to do?  The list is long.  Probably the top priority is the public sector.  Much of the fiscal adjustment has been achieved through higher taxes, which keep consumption in the doldrums and eliminate it as a source of growth.  The approach for growth needs to be the opposite:  cut back the public sector radically, eliminating the duplications of functions in the different levels of governments and slashing inefficient programs to retain funding for health and education; while reducing taxes on work to encourage employment.  There is much to do, and the perception that politicians are not moving to investigate corruption because all are implicated is sapping confidence from the economy.

Additionally, it needs to be easier for borrowers to walk away from their debts in Spain.  This could take many forms, but at the least, homeowners “under water” should receive some relief, including being able to return their homes to the bank without further penalty.  Spain must deleverage if it is to get back on a growth path, and the process has barely started.  If banks are not obliged to bear their part of this burden, full recovery could be delayed by several years.

Finally, there is still much room for improvement in the labor market.  Last year´s reform was major and courageous, and has helped keep many small firms alive.  But unions in large companies are still able to force them to pay the old, higher severance costs.  This could endanger the survival of companies like Iberia.  In addition, the unemployment benefit system needs radical reform.  The promised public-private partnership between the government and temporary work agencies, to find and offer jobs to those on benefits, needs to be implemented quickly.  The unemployed should be obliged to attend job interviews or enroll in training after 6 months on benefits.  Other European countries have implemented these changes with good results.  Spain cannot afford to pay benefits for two years and more to people who then lose their skills and are hard to re-employ.

Many other areas remain:  simplifying the procedures to create a business, doing something with 1.3m units of vacant housing, expanding credit to the starved small and medium-sized firms… The government started out boldly with its labor market reform and other fiscal and financial reforms, but seems to have lost its momentum.  Spain in its fourth year of crisis needs to see that its leaders are solving its problems.  Outside help or not, the government holds some cards it could play to restart growth in the economy, and it needs to start playing them soon.  Hopefully this week´s announcements will mark a before and an after for the process of structural reform in Spain.