As Spanish unemployment rates climb toward 25% for the third time since the 1980s, the dilemma over how to respond becomes a key issue for the upcoming election. 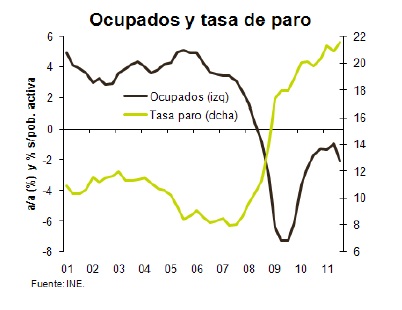 Neither party is making radical proposals, for obvious electoral reasons, but also because none of the options are attractive.

If the PSOE does as its candidate indicates and opts for fiscal stimulus via public spending without a labor market reform, the economy could reactivate, but markets would react negatively to the higher deficit, pushing up interest rates. If there were no labor market reform to accompany the stimulus, Spain would find itself in the same situation it has encountered so often in the past: little job creation until pressure on demand became so great that new workers had to be hired. At that time, firms would create temporary jobs and the unemployment rate would fall, but the structural problems would remain intact.

If the PP were in office, its candidate’s comments indicate that there would be no fiscal stimulus but extensive reform to encourage job creation, including (unspecified) changes in collective bargaining and a unification of contracts to reduce the temporary/permanent dualism that has become traditional in Spain. But while these reforms are urgently needed, it is not clear what their immediate impact would be. If severance pay were reduced on all contracts, companies would likely take advantage of the situation to shed even more jobs, boosting the unemployment rate past 25% in just a few quarters. The result would be an economy that would be better prepared for a solid, more equitative recovery in the medium to long term, but the short-term effect would be a more severe crisis.

Spain has dallied over labor-market reform for so long that there are no longer any attractive options left. To transform its labor markets in the depth of the most serious crisis in decades is rash and will have a very high political cost. But if the economy is to regain competitiveness and offer options to the youth, it has no other choice