The news last week that housing sales jumped in the final quarter of 2010 in Spain appears, at first blush, to be a sign that a deeply depressed market may be turning around.  But looking beyond the surface, what seems more likely is that plenty of bad news still awaits.

Housing sales were up more than 14% in the last three months of 2010, according to the Ministerio de Fomento, after three years of steady decline.  The increase lifted housing sales by almost 6% for the year as a whole.

However, looking beneath the surface, it still appears that Spain´s housing market has substantial room to decline before it begins to recover.  At the end of 2010, the tax deduction for interest paid on mortgages for the main residence was eliminated, which gave an artificial but temporary boost to sales. 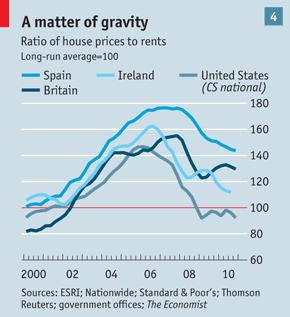 The underlying reality has three facets:

1) Spain is one of the developed countries that suffered the largest housing bubble.   The housing price-to-income ratio for Spain rose from just under 100% in 2001 to almost  167% in 2006, on the eve of the crisis, according to the OECD.  This was the largest increase registered in any developed country except New Zealand.  The price-to-income ratio also rose more than anywhere else except New Zealand over the same period, from 105% to 156%.

2) Despite the crisis and three years of near-stagnant sales, prices in Spain have fallen very little, compared to other countries with housing bubbles.  At issue could be expectations or bank reluctance to release housing units onto the market for fear of showing even greater losses in asset value.  The Economist warned recently that housing prices were probably still overvalued by about 40% in Spain.

3) There are still somewhere near a million vacant housing units around the country awaiting potential buyers.  Many of them are in coastal or suburban areas, which makes them harder to sell at a time of near-recession and rising oil prices.

Combine these three dismal factors with still-rising unemployment, weak domestic demand and the prospects of higher euro-area interest rates in the short term, and it seems unlikely that the good news that Spain heard about its housing market a few days ago was anything more than a small upward blip on a downward sloping sales curve.