Spain before the crisis had quickly jumped from a country with little or no immigration to the country with the highest immigration rate outside the United States.  Now that the economy and in particular the construction sector have slumped, these immigrants are out of work and often out of income.  What is the right thing to do?

The latest labor-market survey (EPA), for the 4th quarter of 2010, showed that the unemployment rate for native Spaniards was 18.47%, compared with 30.4% for foreigners.  Of an estimated population of 4.7 million working-aged foreigners in Spain at the end of 2010, nearly 1.1 million were looking for work actively and were unable to find it.  According to a different INE series, nearly half a million foreigners had been out of work for more than a year.  Of this number, more than a third came from regions outside of Europe and Latin America. 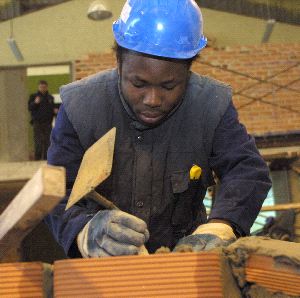 Although the flows of migration to Spain are slowing down –according to the latest INE data, only 122,000 foreigners entered Spain to live in 2009, compared to almost twice that number in 2006—foreign workers continue to come.  Presumably, their economic prospects in their home countries are even worse.  Spain still does need their lower-cost labor, in a nation where even unemployed Spaniards are often unwilling to do hard work for low pay.  And more importantly, going forward, a quickly aging nation like Spain needs younger immigrants to fill jobs and help pay pensions.

Spain, along with other developed nations, needs immigration, but it needs to do some serious thinking about immigration and move quickly toward sound policies that match its rhetoric about the world.  One of the best ways to help poorer developing countries, besides allowing free trade with them, is to permit their workers to work in richer countries.  A large portion of migrants´ income flows home to people who need it, potentially lifting them out of poverty.  In contrast to aid, the assistance depends on the effort and initiative of the worker; and it cannot be usurped by corrupt or inept home governments.

If Spain truly believes in solidarity with developing countries, it needs to allow workers to come.  But Spaniards, and Europeans as a whole, may not be prepared to integrate foreign workers in the way immigrant countries like Australia, Canada or the United States have done.  If this is the case, it might be better to work out a clear, well structured program of temporary work so that foreigners can come, stay for a defined time and then return home with their earnings.

New policies are needed.  And almost anything is better than allowing migrants to languish on the streets without work or with only subsistence wages from the black market, and without resources even to return home.